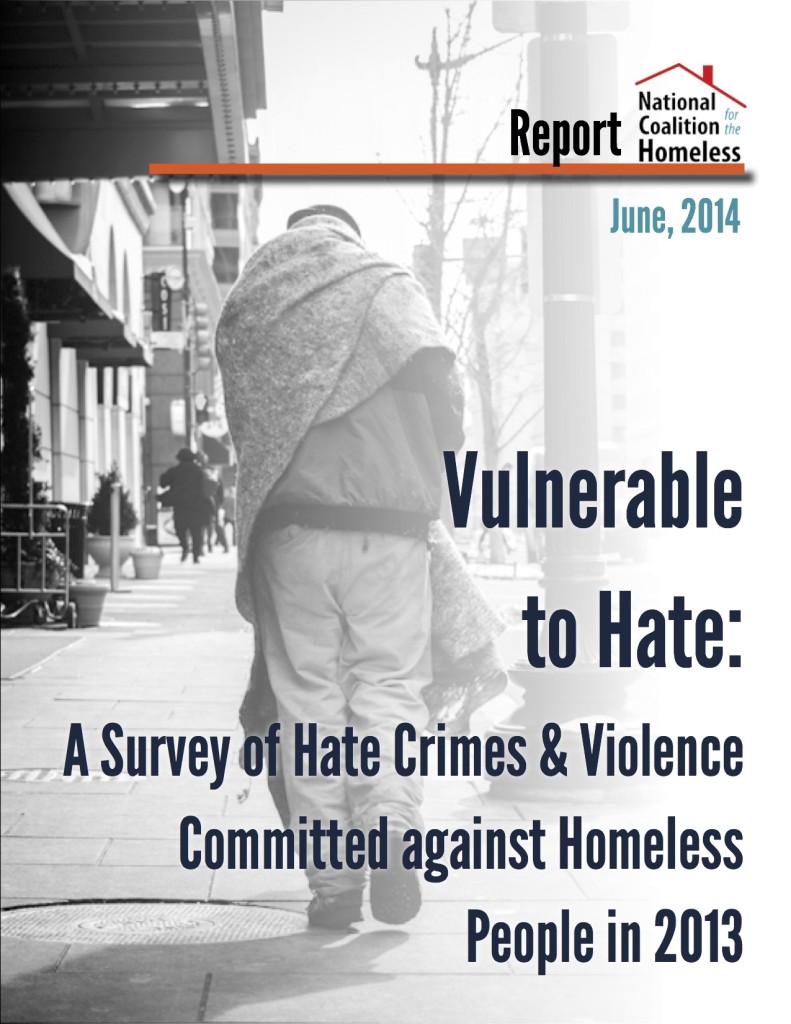 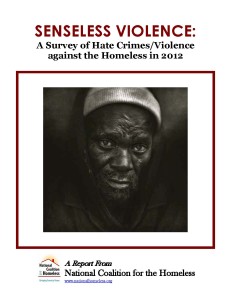 The National Coalition for the Homeless has been tracking hate crimes against homeless individuals since 1999. This year’s report only shows a slight improvement in the number of lethal attacks. In 2012 alone, of the 88 attacks, 18 resulted in deaths. A majority of the perpetrators this past year were young men under 30, and the victims were primarily males over the age of 40.

Some of the most horrific cases include a serial killer targeting the homeless population of southern California because he viewed it as a public service, teens killing a homeless man over one dollar, and a homeless woman set on fire who suffered second and third-degree burns over 20% of her body.

“This violence is prompted by a profound lack of empathy for fellow human beings, the same moral failure that allows our society to tolerate the larger tragedy of homelessness,” said Jerry Jones, Executive Director of the National Coalition for the Homeless. “Homeless people deserve our help and protection. These attacks are a shocking failure in our society’s obligations toward the most vulnerable among us.”

In many cases, homeless persons are targeted for these attacks simply because they are without housing. The National Coalition for the Homeless advocates for the inclusion of homelessness as a protected class in state and federal hate crimes legislation.

NCH began with activists’ pursuit of the right of people experiencing homelessness to have shelter and affordable housing, and has developed into an advocacy organization at the forefront of implementing policies to prevent and end homelessness. Our 30th Anniversary is a period of reflection, a time to honor the past and build hope for the future through effective and impactful education, advocacy, programs and service.

NCH inspired descriptions from Sen. Cardin like “an outstanding organization,” and one that commits to “selfless striving to end homelessness.”  These remarks welcome a glance at actions that helped create this legacy, like ensuring that those who have experienced homelessness remain an integral part of advocacy efforts, especially through the Faces of Homelessness Speakers’ Bureau.  Rep. Johnson acknowledged that NCH “has made tremendous gains since its inception,” which keys into our successes in awareness, philanthropy, advocacy and service related to homelessness over its thirty-year history.  Sen. Cardin  pointed to NCH’s shaping of housing policy for the economically deprived, and how it “spearheaded advocacy for the Hate Crimes Against the Homeless Statistics Act,” which remains a substantial move toward preserving the civil rights of those experiencing homelessness.

This recognition highlights not only the organization’s tremendous bounds over its three-decade history, but also a needed positive relationship between NCH and members of Congress.  Both Rep. Johnson and Sen. Cardin realize the importance of introducing policies to end homelessness and deserve their own praise for efforts that demonstrate legal strides towards ending homelessness.

Rep. Johnson was a co-founder and currently co-chairs the Congressional Caucus on Homelessness, and recently conducted a congressional awareness briefing on family homelessness in America.  She also introduced the Violence Against the Homeless Accountability Act of 2013, which pushes for the Department of Justice to include uniform crime stats concerning hate crimes against homeless individuals.

Sen. Cardin has also expressed support for protecting people experiencing homelessness from violence, introducing a bill in the previous session of Congress to quantify hate crimes against people experiencing homelessness (Hate Crimes Against the Homeless Statistics Act), making an effort to include NCH’s own documentation of hate crimes against the homeless, and conducting the first ever Senate hearing on violence against the homeless.  Both Sen. Cardin and Rep. Johnson have headed a congressional push to end homelessness, which includes providing homeless veterans with homes, and revitalizing housing in and bringing jobs to disenfranchised neighborhoods.

These initiatives mark a partnership between NCH and Congressional members that has been critical in the coalition’s epoch of successful advocacy.  Congress’s willingness to pursue valued policies gives organizations like NCH needed allies, voices that offer legislative support to the priorities that will bring an end to homelessness.  In accepting deserved praise on its 30th Anniversary for years of accomplishments on the path toward ending homelessness like promoting the Bring America Home Act, NCH equally acknowledges and thanks Sen. Ben Cardin (D-MD) and Rep. Eddie Bernice Johnson (D-TX) for their efforts.