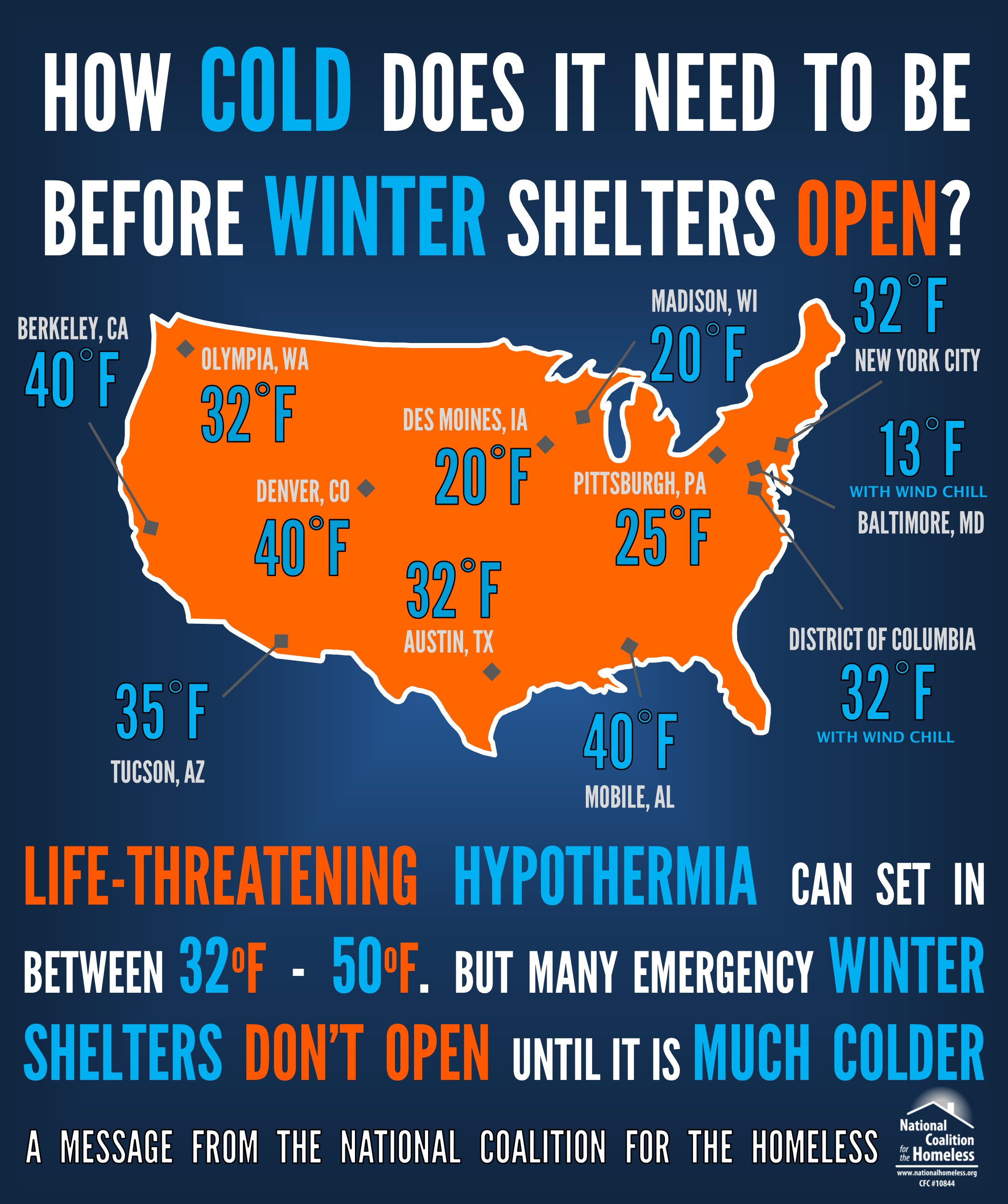 Extreme cold weather has touched just about every region in the country this winter. Snow, ice and below normal temperatures have caused traffic jams and school closings, but many communities have also been opening additional shelter for those who have no other place to stay warm.

Each year, as winter approaches and the temperature begins to drop, many homeless people move from the streets to their city’s shelter system to escape the cold. However, few communities have city-wide cold-weather response plans, and many of the plans currently in place leave gaping holes in accessibility.

In rural areas, shelters often have no outside resources to help them cope with the increased demand caused by cold weather conditions. Many shelters or cities offer expanded winter services only during certain months or only when the temperature falls below a pre-determined and arbitrary cut-off temperature. Above those cut-offs (hypothermia can occur in weather as warm as 50 degrees Fahrenheit) many cities do not offer resources to help the homeless people escape from the cold.

Without a carefully constructed winter plan, homeless service facilities may find themselves unable to accommodate the influx of residents, and some of those people who seek shelter are turned out into the cold. With nowhere to stay except the streets, people experiencing homelessness have a much higher risk than the general population of developing exposure-related conditions such as hypothermia and frostbite. These conditions can be immediately life threatening and may also increase the risk of dying from unrelated conditions in the future. Increased homeless services, especially additional shelter availability, are necessary to accommodate the amplified need in the winter.

As summer turns to fall and the weather starts to cool, are American hearts getting colder as well?

That’s the sad conclusion of a recent study by Princeton professor of psychology and public affairs Susan Fiske, who used neuroimaging to study test subjects’ reaction to images. She found, as the Chronicle of Philanthropy reported, that when shown photos of the homeless and the poor, “their brains responded as though the images depicted things and not humans.”

In fact, after a summer during which the nation was forced to once again confront its complex relationship with race in the wake of the George Zimmerman trial and controversial court rulings on voting rights and police searches, it may be some surprise that Fiske found anti-poverty feelings to be “the most negative prejudice people report” — even beyond racism.

Fiske, who has studied America’s attitudes toward poverty for more than a decade, was sadly unsurprised by the results of the study. She told the Philadelphia Inquirer that Americans “react to the poor with disgust.” One formerly homeless woman, now a counselor to others who are homeless, agreed, telling the newspaper, “You’re looked at like you’re trash. It’s like they think you want nothing out of life. Like you’re not still a person.”

Fiske says most people do not vocalize their contempt for the poor. But this lack of empathy eclipses charitable instincts, due to the perception that the poor do not deserve to be helped since they are somehow lesser than their more successful — or lucky — peers.

Years of widespread economic hardship exacerbate the problem. Yale psychology professor John Dovidio says prejudices against the poor get worse during hard times, as the belief that “if you work hard, you get more, and if you have less, you deserve less” is amplified by harder times for many.

New York Times columnist Charles Blow, writing about Fiske’s study, says this coldness has seeped into politics as well. While America once invited “your tired, your poor, your huddled masses yearning to breathe free,” Blow says too many elected representatives are “insular, cruel and uncaring,” blaming welfare “for creating poverty rather than for mitigating the impact of it.”

Blow notes a June NBC News/Wall Street Journal poll that found that Americans believe the top cause of continuing poverty is “too much welfare that prevents initiative” — an attitude mirrored in the House passage one month later of a farm bill that leaves out the Supplemental Nutrition Assistance Program entirely, at a time when nearly 50 million of us depend on it.

But there is hope, in the attitudes of individuals if not the masses. As we wrote last month, Americans are still concerned about homelessness, even if the ongoing nature of the crisis keeps it from leading the evening news. A sizable majority opposes SNAP cuts, and one in four Americans say they know at least one person who is or has been homeless. It is easy to disdain a faceless other, but harder to condemn a personal acquaintance.

Adam Bruckner of Philadelphia’s Helping Hand Rescue Mission would agree. He told the Inquirer that his “brain would have lit up with his personal prejudices” in Fiske’s test if he had taken it years ago. What changed his mind?”

“Once I met the mom, and the homeless person, it changed me,” he said. “I saw the humanity inside.”

In an era when each new tragedy appears on our Facebook feeds and smartphone screens within minutes, with donating to the victims as simple as texting a five-digit number, compassion fatigue is quick to set in. The caring public, genuinely interested in helping, faces a rush of ever-changing news — hurricanes and tsunamis, chemical plant disasters, refugee crises, and on and on. It is therefore understandable that ongoing crises like homelessness and hunger may slip off the radar.

But Americans are still concerned about homelessness. A Gallup poll from March of this year found that 43% of us “personally worry about” homelessness and hunger a “great deal,” and 32% a “fair amount.” That’s a full 75% of the public. Just 25% of respondents said they worry about these issues “a little” or “not at all.”

This concern persists even with the budget deficit and the sequester at the top of Washington’s agenda. A Hart Research Associates poll this spring on behalf of the Food Research and Action Center found major resistance to cuts to the Supplemental Nutrition Assistance Program. Seven out of 10 respondents said cutting SNAP is the wrong way to reduce the deficit.

Some of this concern may be because homelessness is closer to the average American than often thought. A 2011 poll found that one in four Americans personally know someone who is homeless, with 35% of African-Americans and 32% of respondents between the ages of 18-29 having a homeless acquaintance.

That Florida poll says a lot about how we view the homeless. Clear majorities said most homeless people possess “good job skills” (59%) and that “it is hard for homeless people to be safe and free from harm” (79%). Tellingly, three out of five respondents said homeless people can generally not “be identified by appearance alone,” while four out of five said it was not true that “the homeless are more likely than others to commit violent crime” and that programs to aid the homeless “are too expensive.”

Paul Toro of Wayne State University told AlterNet that compassion fatigue about homelessness is largely limited to the media, which has lost interest in the homelessness crisis even though the public has not.  But in a face-to-face encounter, things are still different. Paul Boden of the Western Regional Advocacy Project, who was homeless for several years, said, “The closer that poverty is to the face of people that aren’t in poverty, the uglier it is. And the unfortunate part is that often gets manifested as the person is ugly — not the poverty is ugly. And poverty is