A National Call to Action to End Homelessness 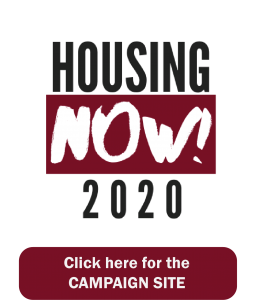 Thirty years ago, one hundred fifty thousand people marched on Washington as part of the Housing Now! March for Affordable Housing to demand action to address the growing homelessness and affordable housing crisis at that time. This led to the passage of the Cranston-Gonzalez National Affordable Housing Act in 1990, which created among other things the HOME program. Housing Now! followed the successful organizing and mobilization led by Mitch Snyder and others that results int he passage of the McKinney Homeless Assistance Act in 1987. To truly end homelessness we need to re-energize and organize a movement to demand a significant increase in federal funding that keeps pace with rising local need. We need a national HUMAN RIGHT TO HOUSING! We need to Re-Build the Movement to End Homelessness NOW!

Join the movement by becoming a member of the National Coalition for the Homeless.

Find information and resources if

Find more information on topics ranging from Criminalization to How to Get Involved:

Be a part of the solution: